Abstract: How do you take out a jade bangle stuck on the wrist of a person who died recently? Below is a true account of a friend of mine who took out a bangle from her mother who passed away. It bothers on the supernatural but it did happen. As much as a person who wishes to possess a jade piece, the jade piece would also be seeking the rightful owner.

A few months back I received a frantic phone call in the wee hours of the morning. I usually kept my mobile on as late night phone calls were quite usual when the kids were scattered in various parts of the world.

几个月前，我在凌晨收到一个疯狂的来电. 我通常会把手机保持在深夜都能够通话的状态, 因为我的孩子们都分散在世界各地 .
I noticed it was a local call and it was from an old friend who resided in London.

“Hi ! Jasmine” I mumbled, still in my slumbers.
“Arthur! I am dead!” she was quite distraught.
“Hey, you are talking to me, now who is dead? “ I answered, waking up instantaneously. She sounded distressed.
“Oh! My mother passed away yesterday and I flew back immediately with my husband. We were in Singapore then.”

“哦！我母亲昨天去世了，我立刻和我的丈夫一起飞回来。 那时我们在新加坡。”
Jasmine was a family friend and she would not call me at such unearthly hour if it was just to announce the death of her mother. That could come later in more saner hours.
“Oh! I am sorry to hear that. What can I do for you?” I came straight to the point.
“Do you remember the jade bangle on her wrist? The bangle which you said was real jade and it was valuable” 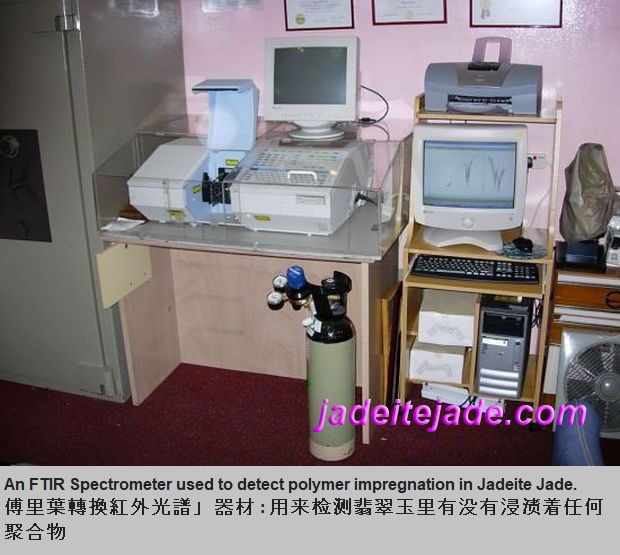 A few years ago Jasmine took her mother to my shop to examine her jade bangle. At that time she was quite slim and the bangle could slip off her wrist easily. It was a well cut bangle, with well proportion round thickness of about 10mm along the whole rim of the bangle. The color was of spinach green, evenly spread and the texture was of very fine grain. I ran the bangle over my FTIR (Fourier Transform Infra-Red) spectrometer equipment for polymer impregnation and there was no organic compounds present.

It was the Type A natural jadeite jade. This was a fine specimen, worth a lot of money in today’s market for jade.

“Yes, of course I remember that jade bangle.” I replied. 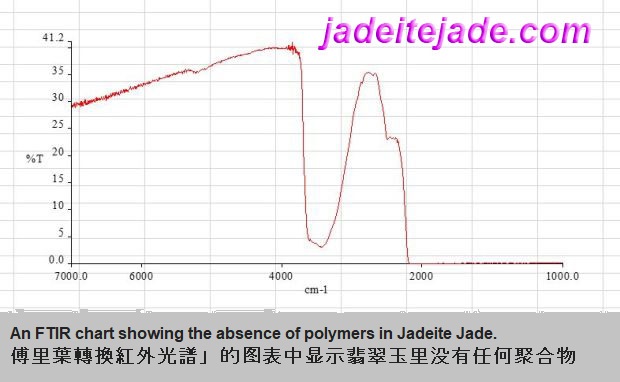 Bangle Stuck On The Wrist

Then Jasmine began to narrate her woeful tale, now that she had calmed down. She was very close to her mother and it was a great loss to her. The grief she felt was profound. She was in a self-denial mode, ridden with guilt for not being with her mother when she was taken ill and not being able to bid her the final farewell and witness her passing through this world.

Jasmine had 3 sisters and 2 sister-in-law. She was the second youngest of the siblings. They were all by her mother’s side when she breathed her last. All her mother’s earthly possession of jewelleries had already been bequeathed to each of her sisters and in-laws, except the most valuable bangle on her wrist. Perhaps she may have mentioned in the past that the bangle may go to Jasmine but with the passage of time, it seemed that every woman of the house had laid claim on the bangle and that the mother’s intention was slowly blotted out.

Her mother had put on weight and the bangle was now stuck in her wrist. Immediately upon the declaration of death by the doctor, each of her sister-in-law and two of her sisters had tried to take out the bangle from her wrist, starting with the eldest sister-in-law. Her younger sister refused to touch the bangle. With each passing hour as rigor mortis set in, the task was made more difficult. 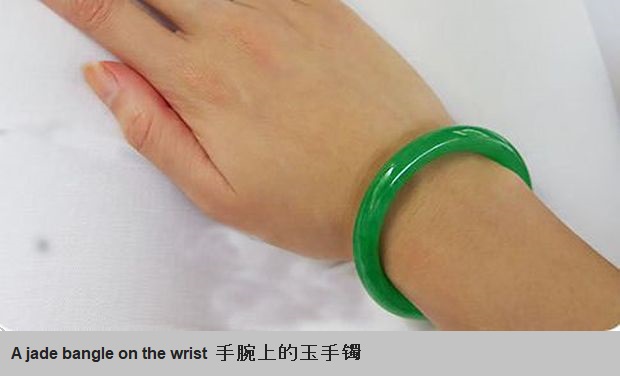 Jasmine mentioned that there was greed written on the two sister-in-law’s countenance. Each wanted the bangle badly, even when her mother was alive. They oiled her wrist and tried the usual method of placing a thin plastic wrap over the wrist to pull it out, but to no avail.

So I asked Jasmine, “Is her body going to be cremated or to be buried?”

Just as I uttered the alien word of ‘her body’, I felt it strange that I no longer referred her to be her mother, but an object. I meant no disrespect but it was natural that with death a link would be broken unconsciously between the living and the dead.

I quickly apologized, “I mean is your mother going to be cremated or buried?”

“She is to be buried alongside my father at the Nirvana Memorial Park” Jasmine said, without catching onto the nuance of my word.

“Where is your mother’s body now? Has it been placed in the coffin at the Nirvana Memorial Centre for the wake?”

“She died in the house and later in the morning the funeral care people will come and do the needful.” She said.

“This is what you are going to do, Jasmine. Talk to all your siblings and sister-in-law. Tell them that this is the advice from the jade expert. It is not that I am an expert in funeral or in death-care, but I have seen this on a few occasions.” I said. This was the time to speak with authority to a person who had momentarily lost her way.

“And tell them to refrain from crying.” I added further.

Jasmine was all ears now. 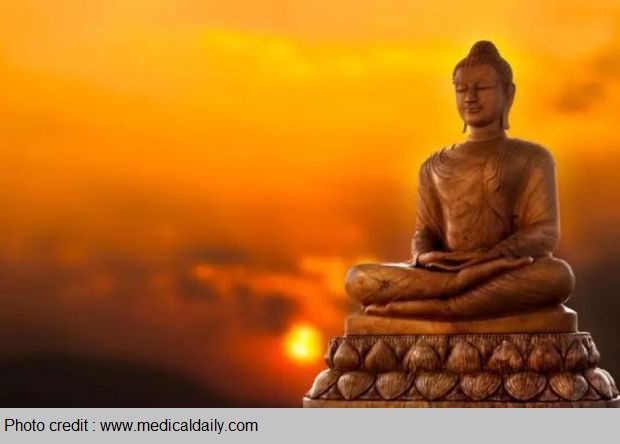 In one aspect of a Buddhist’s thought, the ‘soul’ of the deceased having severed its link to the physical body may have yet come to terms that he/she was no more on the earthly plane. The deceased may not go peacefully back to its source or go where it belonged when the ‘soul’ saw the grief and sorrow of his/her loved ones. The final farewell may be too painful.

The days of employing professional mourners, as in many Hong Kong movies, to wail, cry and grief loudly was over. It was more of an ostentatious display to the general public on the filial piety of the living on how much they had loved the deceased during the funeral wake. Modern Buddhist thoughts during a funeral wake were to refrain from crying, so that the deceased could leave peacefully.  Most family members could hold back their tears as they were too pre-occupied with the ceremony but once when they were back to the house, the full impact of the loss would come to bear as the deceased would not be there anymore.

The family members were to be gathered around the death bed of the deceased. They could say their own prayers, according to the belief they held, they could press their palms together in supplication for God’s mercy or perhaps asked for forgiveness from the deceased. The wrist should not be applied with any olive oil or any ointment. Then each of the lady, starting with the eldest sister-in-law, as per Chinese custom that she was the most senior of the ladies of the house, had to give a formal salutation to address her as ‘mother’ as gently as possible and asked for permission to relieve the bangle from her wrist. If it was meant to be, the jade bangle would belong to the lady who could remove it without much force.

“What if the bangle still remain on her wrist?” Jasmine asked.

“Then let it be buried with her. In later years when your family wishes to intern her body, then the ownership of the property might be decided by fate. The Chinese believes that jade is a living stone, and as much as a person wishes to possess it, the jade would also choose its master.”

“Thank you, Arthur”. With that we ended our conversation.

Jasmine called me again in the morning.

“You wouldn’t believe it, Arthur. My mother gave me the jade bangle. I mean, I took it off her wrist while all others fail.” Jasmine’s voice had a tinge of excitement and bewilderment too.

“It was so strange and mysterious. All of us gather in solemnity around her death bed. My eldest sister-in-law had a first go. It stuck resolutely. My mother’s wrist was stiff and unyielding. My sister-in-law’s hands were trembling as this may be the first time she touched a dead body.” Jasmine continued.

I listened intendedly. It seemed that her two sisters and the second sister-in-law had failed to take out the bangle too. They were hesitant, afraid and perhaps saw a cold stiff body for the first time, and suddenly they did not want the bangle anymore at the prospect of taking something from the dead.

“I called my mother and I was fighting hard to hold back my tears. With both hands I held her wrist. And I said softly, ‘Mum, if you wish for me to have this bangle, let me take it out smoothly.’ ” Jasmine said.

“Suddenly I felt my mother’s wrist became soft, though it was still cold. I just pulled on the jade bangle without much force and it slipped off her wrist easily.” Jasmine said.

“Then as I was holding the jade bangle in my palm, one of my palm was still holding onto her wrist. It became stiff again immediately.” Jasmine continued, and by now she was in sobs.

“Arthur, when I was holding onto the jade bangle on my palms, I burst out crying.”

I was indeed relieved to hear that the bangle had found the owner. Jasmine may have forgotten that when she was at my shop with her mother, her mother intimated to me that she would give this bangle to this daughter of hers. It was a family heirloom, passing down through a few generations. It was always from the mother to the favorite daughter, and had never change hands to any daughter-in-law.

And the last wish of her mother was fulfilled even after her death.

May God’s will be done.

The Diamonds – A Great Video Clip of the 50s

Arthur - January 28, 2011
6
One of the most fascinating aspect of Jadeite Jade bangle is that you can use your hearing faculty to determine its identity to...