I was with a tour group on a visit to the Western Rim, Hualapai Indian Reservation, Grand Canyon, Nevada, USA. All of them were from mainland China, except me. The day before, we were traveling on a coach bus outbound from Los Angeles to Las Vegas, the Neon City of glittering lights, Casinos, the Entertainment Capital of the World where most of the world’s famous artists perform live on stage, circus, comedy and adult shows.

The tour guide began the ritual of introducing the various tourist attractions and shows to see in Las Vegas and the Grand Canyon to the audience in the bus.

Firstly, the tour guide had a selective product listing, granted that we were only in Las Vegas for 3 Days / 2 Nights. Recommendations given for those products endorsed by the tour guide were all the marketing hype of ‘must-see’, ‘your money’s worth”, “awesome, terrific and exhilarating’, “don’t miss out” and so on and so forth.

Finally, the tour guide began the systematic product assassination of a key tourist spot of the Grand Canyon West – the SkyWalk.

The tour guide bellowed with enthusiasm, holding onto the big swinging mike and gesticulating with the other arm, “You come to Las Vegas, you must see the Jubilee Show at Bally’s Casino, with bare breasted showgirls and showboys dancing and kicking on stage through a 90 minute extravaganza. This is the best of the show in Las Vegas.  This is only for adults.”

The tour guide continued, “Those with children can go for the circus show at …….” I didn’t hear the rest, as I have already counted myself in. This was the only show the tour guide recommended and no others. I smiled inwardly. I have been to Las Vegas a couple of times in the past and there were a variety of ‘other’ shows.

“Ticket will be at $98 per pax and we will take you right to the doorstep of Bally and will transport you back to your hotel at Stratosphere Casino after the show.”

All ‘adults’ signed up. Those family with children signed up for the circus show. Looked like a breeze when it came to shaking loose the wallet of foreign tourists, then again, the tour operator was a Chinese and when it came to making money they were savvy businessman.

Next on the agenda was the trip to the Grand Canyon, the morning after. Erh, I didn’t mean a night of excessive binge on the casino’s tables or other mid-night amorous activities. It was a day trip to the Seven Wonders of the Natural World, the following morning.  When we reached Las Vegas at around 6 o’clock pm that evening, the tour guide announced on the mike, “Wakey! Wakey! People, Good morning.” Some were still in slumbers after traveling almost a full day across desert land. “In Las Vegas, we wake up in the night and sleep in the day.” That was worth a chuckle for most first timers to Las Vegas. Luckily, the tour guide did not mention anything on the habit of a vampire.

“We have the Southern Rim and the Western Rim for you to choose from.” The tour guide said.

“Southern Rim will take 5 and half hours to reach from Las Vegas. We only have half hour for you to do your photos.” The tour guide paused for a while to let that sink in, then the tour guide continued, “Entrance is free.” Short but not so sweet.

“Western Rim is fabulous with many interesting activities.” The tour guide said.

“You will have a panoramic view at the top of the Grand Canyon from the Western Rim. You will visit the Red Indian reservation where you can see their way of life. Then there is a helicopter ride which will descend 4,000 over feet to the floor level of the Colorado River. Then you will ride the small rapids along the river on a barge boat and take the helicopter back again. You will be given a free lunch, on the fare of the Hualapai Tribe.

“The entrance fees for each pax is only $98. The helicopter and boat ride will cost $205.” The tour guide exhorted. “Furthermore, the bus trip only takes one and half hours to reach and that means you will have a lot of time shooting photos before we go back to Las Vegas.”

In for a penny, in for a pound. All of us signed up for the Western Rim. Those whose preference was the Southern Rim which we indicated on a form back in Los Angeles changed their mind and opted for the Western Rim. All of us signed up for the helicopter ride too, and those with small children whose height barred them from going onto a helicopter stayed back.

Less enthusiastic as before the tour guide said, “You have to pay $35 for entrance. The walk is only from here to the end of the bus, a very short distance.” The tour guide pointed to where he/she was standing to the tail end of the bus, which was probably around 25 feet. “It’s not worth your money.”

“You have to take out your shoes and put on soft padded shoes. No handphones and cameras are allowed. The proprietor is afraid that you may drop your mobile onto the glass and damage it.” The tour guide said with a slight frown.

“There are professional photographers who will take pictures of you on the Skywalk. Each pix cost $30. For 4 pix you have to pay $100. Well, I think that is a bit expensive for digital print-outs.” The tour guide wrenched the knife deeper into our minds.

So they say, three strikes and you are as good as dead.

None of us signed up. There was no questions asked. Most of us thought that this was outrageous ripping off on a tourist for a mousy walk. The tour operator did not use any glamorous language on this ‘famous’ site at all.

I made a mental calculation. If the proprietor of Skywalk would share some of his bounty, say, he received $30 per pax, he would have $1,500 for our tour bus of 50. And that was only for one coach bus. In a day, there were many coach buses arriving and there were no extremities in weather condition in this part of the Grand Canyon, so he could operate hindrance free for 365 days in a year, plus one day for every fourth year.

Hey, proprietor, you forget the gatekeepers. These are the invisible guards at the gateless gate that may open the floodgates and let money rain down on you OR they would block access if there was nothing in it for the tour operator.

Perhaps you have listened too much to those fancy pancy desk-bound marketing consultants who recommended spending big bucks on flyers, banners, posters, inviting celebrities for a walk, on air and on all internet media and above-the-line marketing that they forget one basic rule, the consumers at the gate. Perhaps these consultants have never been to the site or take a coach bus to hear out the tour operators, preferring the cool air-condition in their cosy office and a latte coffee on their table.

Barring handphones and cameras on the bridge was pretty dumb. How often would a person drop his/her mobile or camera accidentally? Most, who carried some big-ass semi-pro cameras have them strung over their necks. And to say the impact of a handphone which weighed slightly more than a pound hitting the glass panels would damage it conjured an image that the bridge was not safe. At least that was what the tour operator told us.

To cap it all, charging $100 for 4 pix was too much. This was no scam, but the amount charged was outrageous and so steep that most tourists thought that this proprietor was a greedy capitalist, at least to those mainland Chinese who may still nurture some communal and socialist ideals.

Hey Proprietor, you missed the forest for the trees, or you missed the trees for the forest, whichever way, you are missing a mighty lot of dollar income. Allowing tourists to use their handphones will give you very wide publicity and a wide audience. Most of them will upload their images or videos taken at the bridge instantly on their Facebook, Instagram, qq or other popular social media for their friends to see or ‘envy’ that they were at the Grand Canyon. When they do this, your Skywalk will be on the list of ‘must-do’ when these friends visit the Western Rim.

Think about it, Proprietor.

Anyway, the Jubilee Show was fabulous. The Western Rim Grand Canyon and the helicopter ride were really money’s worth. The Skywalk, I am not too sure as I didn’t sign up because the tour operator said ‘no good’. 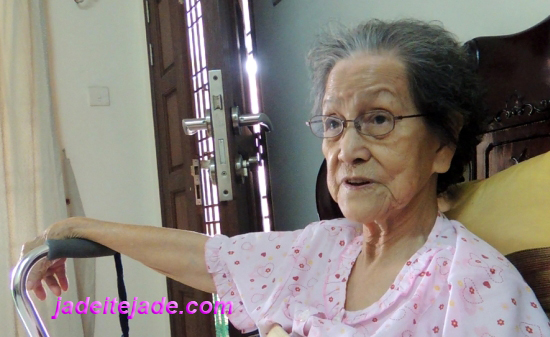 6. A Tribute To My Mother

Arthur - May 11, 2014
0
My mother is now 85. Her ambulatory movement is still good though weak, albeit walking around very slowly with the aid of a quad...