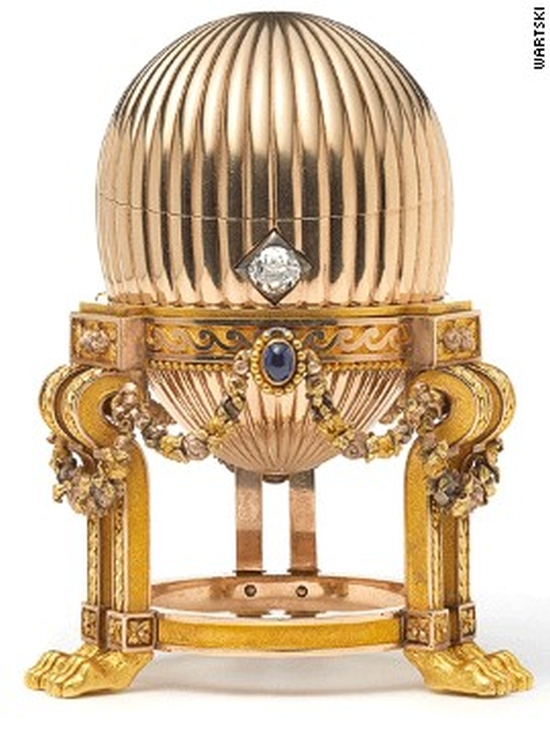 (CNN) — A $14,000 jumble sale find turned into millions of dollars for a man who’d been thwarted in his attempts to turn a quick profit by selling the tiny ornament to scrap metal dealers.

The man, who hails from the Midwest but wishes to remain anonymous, had been left financially stretched after he apparently overestimated what the tiny golden egg would be worth once melted down. He’d been hoping to make $500.

In a fit of desperation one night last year, he typed “egg” and the name engraved on the clock it contained — “Vacheron Constantin” — into Google.

His search brought up a 2011 article in Britain’s Daily Telegraph newspaper describing a “frantic search” for the object: the Third Imperial Easter Egg, made by Faberge for the Russian royal family and estimated to be worth 20 million pounds ($33 million).

Far from being a financial millstone around the scrap metal trader’s neck, it appeared the golden egg might live up to its fairy-tale namesake and avoid the furnace with just a few scratches — to assess its gold content — to show for it.

The man contacted Faberge expert Kieran McCarthy and flew to London to visit McCarthy’s workplace: Wartski jewelers in Mayfair, where the egg will be displayed to the public for only the second time, from April 14 to 17. 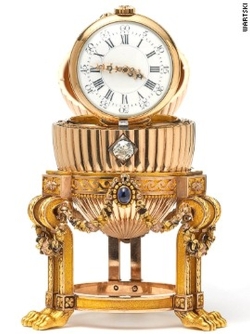 McCarthy said he had no warning about the visit.

“A gentleman had walked in wearing jeans, a plaid shirt and trainers. His mouth was just dry with fear,” McCarthy said, to the extent that he could barely speak. “He handed me a portfolio of photographs, and there was the egg, the Holy Grail of art and antiques.”

Though he had not handled the egg itself, McCarthy said, he was “buzzing from top to toe.” He flew to the man’s home to see the object in person and confirmed that it was indeed the Third Imperial Egg.

The finder “just can’t believe his luck,” McCarthy said. “It’s almost an affirmation of his existence that this happened to him.”

McCarthy said the man had overestimated the value of the egg’s materials — which were worth about what he’d paid for it — but underestimated its value as a work of art.

This is what that object is about, this craftsmanship and demonstration of skill. If you’re not looking for it, you won’t see it.

“He didn’t look upon a work of art at all. He saw that it was pretty and it was nice, but he was buying on intrinsic value. He bought and sold. … This was quite a considerable outlay for him,” he said. “The essence of Faberge’s work is craftsmanship. It’s the beauty of design and the conceiving of that object.”

Pre-revolutionary Russia had seen “this last gasp of imperial patronage colliding with craftsmanship,” he said, as the tsar and tsarina had everything they wanted.

“Their daily lives were lived at such a height of luxury that you couldn’t really excite them with anything of intrinsic value. It was always about the craftsmanship. This is what that object is about, this craftsmanship and demonstration of skill. If you’re not looking for it, you won’t see it,” McCarthy said.

“It’s a very delicate and small object, and people never anticipate that Faberge eggs can be that size,” he said, instead imagining them to be “the size of the Empire State Building, with diamonds the size of footballs.”

But the eggs were a celebration of Easter and love tokens, “so in a way, they are quite modest.”

The finder was far removed from the art and antiques world and so had not recognized the object’s true value. After reading the article, he could hardly believe what he was in possession of, McCarthy said.

Until the 1916 overthrow of the tsar, Carl Faberge’s jewelery workshop made 50 Easter eggs for the family, each taking a year or more to craft. According to Faberge, designs were produced in the greatest secrecy, “the only prerequisite being that they contained a surprise.”

The egg on the brink of being melted down for scrap in the U.S. had been the third made: Tsar Alexander III’s 1887 Easter gift to his wife, Tsarina Maria Feodorovna.

The 8.2-centimeter (3.2-inch) egg is on an elaborate gold stand supported by lion paw feet. Three sapphires suspend golden garlands around it, and a diamond acts an opening mechanism to reveal the Vacheron Constantin watch inside.

The egg was thought to have been lost after the Soviets listed it for sale in 1922 as part of a policy of turning “treasures into tractors,” but in 2011, Faberge researchers recognized it in a 1964 auction catalog, reviving hopes it had survived and prompting the Telegraph article.

After the revolution, 42 of the imperial eggs made their way into private collections and museums. Eight, including the Third Imperial Egg, were thought to have been lost. Two others are thought to have survived, though their locations remain a mystery.

The other five were almost certainly destroyed, McCarthy said, with no reference to them after the Revolution.

The Third Imperial Egg has been purchased by a private collector who has allowed the public to glimpse it at Wartski before it disappears from general view again.

First Time On An AirPlane

Arthur - March 21, 2011
0
The jewelry design community responds quickly to the Sendai Earthquake-Tsunami in Japan by offering styles with sale proceeds earmarked for relief efforts, primarily the...