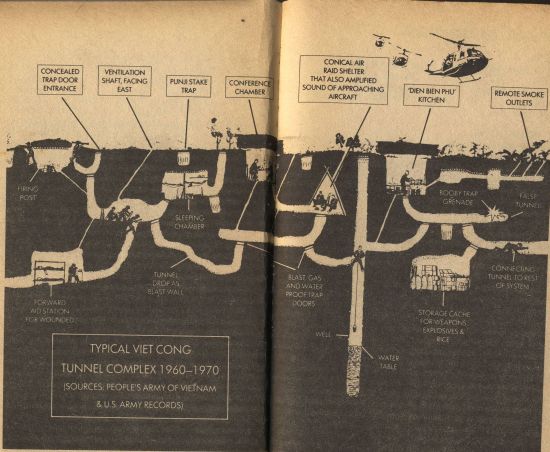 Oops! I am supposed to write the second part of this post, “Teaching Them Kids To Read,” but I was busy on other things and was away.

I had been trying my level best to inculcate the kids with a reading habit but to no avail.  Cal, my second son, was 12 years then but he had not even finished a single English story book as yet. If Cal picked up the reading habit then Wil, my youngest son, would follow.  The eldest daughter was always a Daddy’s girl and she was an avid reader, as I read her a lot of fairy tales even when she was an infant.

Then epiphany struck in the most unlikely place at the Tunnels of Cu Chi. 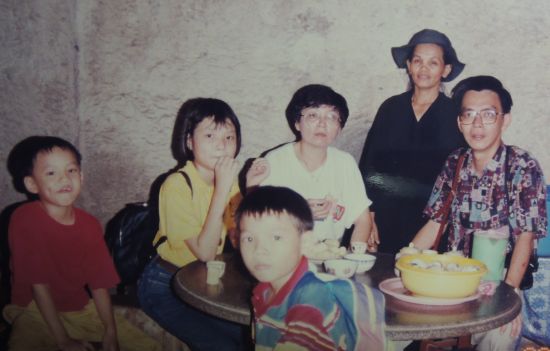 Our family was on an extended one month tour to Vietnam and Cambodia, where I was based then.  The war memorial at the Tunnels of Cu Chi was a must-see tourist destination if you were to be in Vietnam for the first time.  That sunny morning my driver drove us to the Tunnels of Cu Chi which was about 40km from Ho Chi Minh City.

Quite often, I had been telling stories to the kids on the Nam War.  Naturally, they were very excited as they were going to an actual combat site where fierce battles were previously being fought between the Viet Cong guerillas and the American forces known as Tunnel Rats.

The underground Tunnels in Cu Chi were originally dug as hiding places for the Viet Minh, the nationalist guerrillas who fought the French colonials in the 40s and 50s.  During the Vietnam War in the 60s the Tunnels were used by Viet Cong guerillas as hiding spots during combat as well as serving communication and supply routes, hospitals, food and weapon caches and living quarters for the guerilla fighter.

We were given a tour by ‘Viet Cong” guerillas dressed in black pajamas with checkered scarves on their necks and some wore the traditional conical straw hats.  The tunnels had been shored up, white-washed and spotlessly cleaned.   The “Viet Congs” should have placed some plastic foliage, insects and snakes to make the place more creepy and authentic.  The tunnels which were opened to tourists were widened and even an over-sized 250 pounder American could scamper through them by bending double. 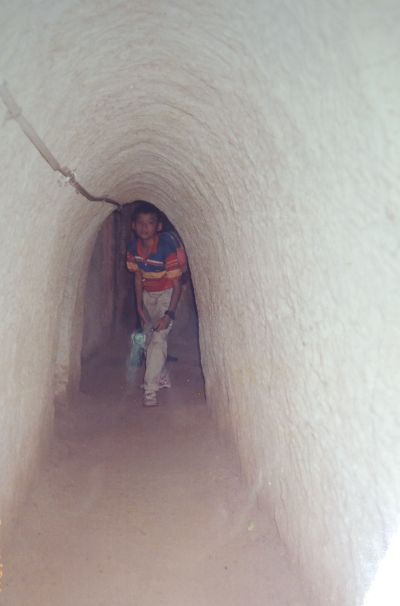 While we were exploring the claustrophobic tunnels, the kids were full of questions and their ever-knowledgeable Rabbit Dad seemed to have all the answers.  Moreover, my Vietnamese interpreter who spoke fluent Cantonese was with us.  Then we entered a cavernous area where it had been an underground theatre before, where cultural troupe would entertain the soldiers or this was the place where the commanders planned their guerilla attacks on the American base.  We were given black tea and some Vietnamese dumplings by a ‘Viet Cong’ woman guerilla. 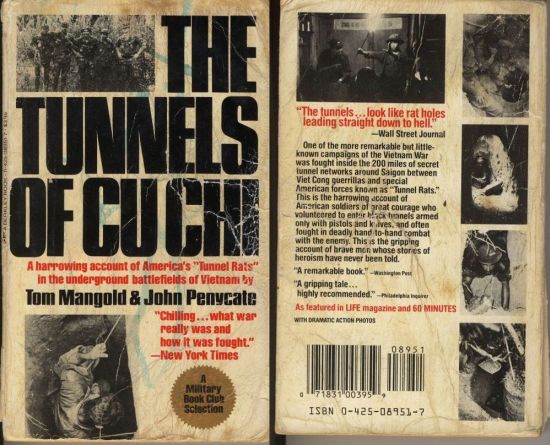 As more questions came in from the kids, I whipped out a book from my knapsack, “The Tunnels of Cu Chi” by Tom Mangold & John Penycate.  This had been my favorite book and I took it along for our trip.

“Now if you want to know more the Tunnels of Cu Chi, you have to read this book.” I said with a triumphal smug on my face.

Cal immediately grabbed for the book.  His interest was now piqued and his excitement was palpable as he wanted to know more. But I would not entertain any more questions.

“We are done here, let’s di di mau back to Saigon.” I said.  The kids were perplexed at first then understanding dawned on them.

We were back to our hotel in Ho Chi Minh City and latter we had a great sumptuous early dinner. 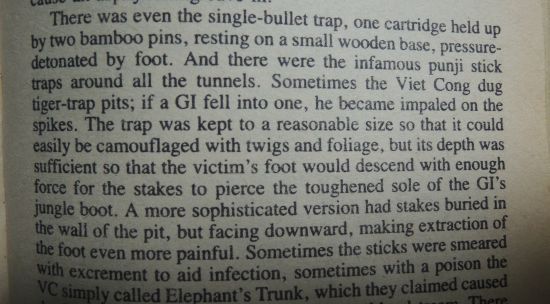 Cal was only 12 then and how would I expect him to understand this book at all.  But to my surprise that kiddo was very determined.  He ploughed through the book in 3 months, with a dictionary at hand and asked me some of the phases which he did not understand.

His English improved dramatically and he picked up a lot of the war lingo of the Nam War. He also began to read other books on Nam.  So he was no stranger to words like, “gooks, grunts, Alpha, Bravo, Victor Charlie, klicks, GIs, Agent Orange, Vietnamization, The Tet Offensive, My Lai massacre, punji traps, a**holes, mean m**f*****, s.o.b. and etc etc etc…

Errh! one had to take the good, the bad and the ugly, all at the same time.

Cal developed a good habit of reading from then on.  He often travelled with me to some God-forsaken places like the ruby mines in Mogok and the jade mines in Hpakan, Burma or to China, Hong Kong, Thailand and of course the good old US of A.  He would read the novels that I brought along.  Our all time favorites were Jack Higgins, Nelson Demille, Michael Crichton, Douglas Preston & Lincoln Child and other novels.

Occasionally, when we were at some boring dinner parties, he would nudge me and said, “Dad, let’s di di mau” and My Excellency was wondering what were we conspiring about.

Now my hair are a lot greyer, have grown older but not necessary wiser and I need to run like mad just to follow Cal’s shadow.

Currently, the 2 young men’s language speak include words like “contango, backwardation, Black Pool, Inverted Yield Curve, resistance & support, Doji candlesticks, Black-Scholes option pricing model or some acronyms like FOMC, PIIGS, MACDs, CDSs or some Options Greeks.  Once in a while Cal would discuss with me some financial matters on the international economy, stock market, derivatives and the forex market.  Truth be told, sometimes I am not familiar with the terms he used, but I still put on a sagely face, pretend some understanding on the matter and at the earliest convenience run to a computer and search up the word to go in deeper.

Eureka! I found it at Google!

Occasionally, Cal would also throw me a mercy bone, lest I get left out of his loop.  Cal is a darn good son.

He would ask, “Dad, look, the Feds are now printing money again with the QE3. What do you think would happen to the US Dollar, the property market in US and the world’s stock market one year down the road.  Remember, the market moves almost 6 months ahead of any economic indicators.”

Or he would tell me that he may enter an options trade, something like “Dad, we are going into DRYS on a Long Iron Butterfly strategy, long one lower strike On-the-money put, short one middle strike At-the-money put, then short one middle strike At-the-money call and long one higher strike On-the-money call. We may be able to make some money if DRYS is rangebound and if the stock is at the central strike price when the options expire.”

Erh! I might have to draw out the options legs and do some serious calculation on DRYS’s options strings.

But then again, I do have my own satisfaction.  I have won the Grand Second Prize.

For the Master has gained a great measure of success when his disciples surpass him. 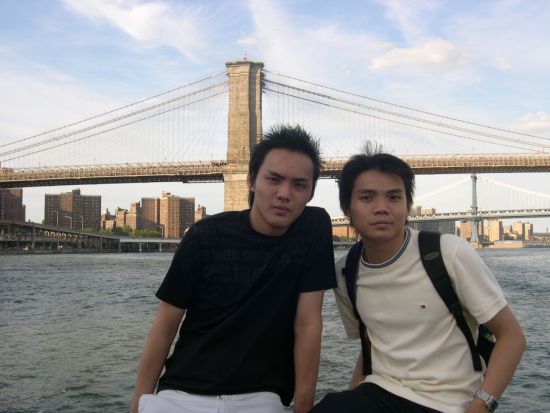 Vegetable Dyes On A Jade