When Cal (second son) was of legal age to ride a motorbike, he started badgering Tiger Mom to buy him a Kawasaki scrambler bike.  He reasoned with her that instead of taking a bus to school he would be able to ride his motorbike to school with his younger brother, Wil, as pillion rider.

But like a large number of concerned parents who did not wish their children to ride a motorbike as they considered it to be too exposed and dangerous, Cal was repeatedly rejected.

Tiger Mom would say. “Wait another year when you are of legal age to drive a car.  Motorbike is too dangerous and accidents are normally fatal.”

But Cal didn’t give up.  He would constantly bring up the matter when Tiger Mom was in one of her good moods.  Or he would go to her room and appeal once more.  But if the door to her room was always opened, her mind was closed. 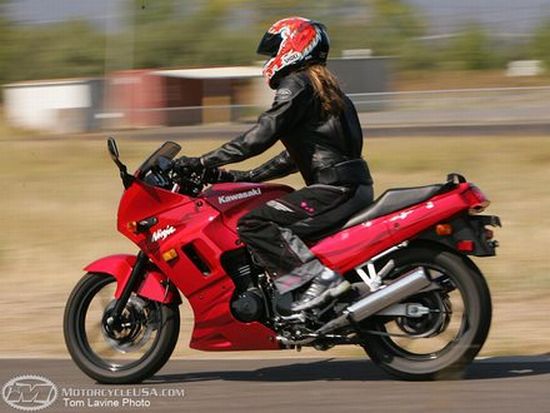 So dejectedly Cal would see me, his Hero Dad, to blow some steam and lamented that all his friends were going round in bikes while he still had to take the school bus, what with so many girls who loved to sit beside him and asked him silly questions.  Hmm, maybe Cal was a handsome chap but really he didn’t give two hoots, and the more he didn’t bother, the more the girls loved to sit beside him.

One day, Cal asked me for ideas on how to persuade Tiger Mom to give way.  He knew that I must also be supportive of him in buying a motorbike, though his great Hero Dad was only an order taker and had no capacity to make such trivial domestic decision in the family.  Crafty bugger, I may not decide but I could be a spoiler, so he must muster up allies first.  He said that it was Mom’s perception that it was dangerous to ride a motorbike.  Well, I told him that one could get killed even while crossing the road.

Now we were on the same page.

I placed the palm of my hand over my mouth and whispered to Cal conspiratory, as if I was about to impart to him some sacred knowledge of the greatest secret ever.

“Now you listen good, boy.  Don’t ask permission, you will never get it.  Just do it and ask forgiveness later.  As to how, you have to think about it.”

Cal listened attentively. He nodded his head. This was a profound statement made by Hero Dad and it set the whole machinery into motion, which later I only had to marvel at Cal’s creativity and ingenuity.

One week later when My Excellency and I came home in the evening, we saw a gleaming Kawasaki Scramble Bike parked in front of the car porch.

Gosh! Where did Cal get this bike from?

Cal was practicing his piano when we came into the dining hall.  There was a crash helmet and a bomber jacket lying neatly on the phone table.  Upon seeing us, Cal quickly stood up, greeted us and waited with bated breath the wrath of Tiger Mom which he knew would descend upon him anytime.

“Where did you get this motorbike and whose bike is this?” Tiger Mom asked sternly.

“Oh! Please forgive me Mom.  My friend requested me to take his bike home as he has to go outstation with his family.  He asked me to keep it for a few days and to polish it until I can see my face on the chrome exhaust.” Cal explained earnestly.

I could have sworn that the ears of Tiger Mom grew an inch longer when she heard Cal apologizing.  Her voice softened and her face creased into a motherly loving smile, “Alright, take care of the bike and be careful when you drive around.”

By and by, the few days as mentioned by Cal had grown longer.  Now the Kawasaki bike had become a familiar fixture in the car porch, the crash helmet and bomber jacket would always be at the phone table in the evening.  Occasionally when we were in the house, Cal would proudly don his jacket, said bye to his Mom, winked at me behind her back and drove off in his bike.

One month later, Tiger Mom forked out 5 grand to get a brand new Kawasaki scramble bike for Cal.  We had known that Tiger Mom didn’t like borrowing things for too long.

When I was about to leave for overseas, Cal came to send me off and said, “Pop, you are terrific.  You taught me B.F.D., taught me to be rebellious in school, teach me all those English phases and he he he, I still remember this, Close your eyes and think of England (another post later!). And don’t ask permission, ask forgiveness, I love that Dad, have a good trip.”

We fist-bumped, hi-fived and hugged each other.  Then I was on my way.

Poor Excellency didn’t know that Hero Dad had been undermining her authority by cutting her legs subtly and slowly.  Ha Ha Ha, the two boys and me did have our last hurray.

Or did we really have it?

My Jade Bangle Is Real

Hey Boy, I Love Your Attitude!