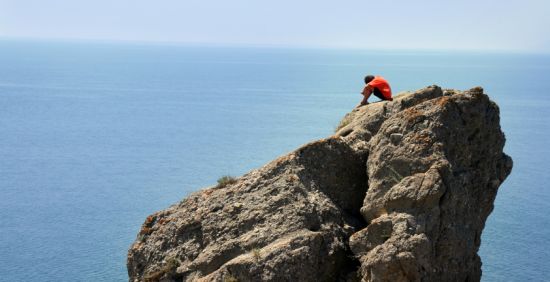 I woke up with a mild headache and my forehead was beaded with perspiration.  It has been coming back to me for the past few years, at almost around this date.  Last night the nightmare was dead-on at the anniversary date of an event which happened several years ago.  It was as if my body has been set with a ‘date’ clock and every June 13, it would give me a frightful wakeup call without fail.

For the first two years, the flashbacks were in vivid color and as the ‘anniversaries’ wore on, the ‘color scenes’ became less intense.  Flashback of last night was in monochrome, black, white and gray pictures running in sequence of the accident scene.  Still the flashbacks were clear as if it happened yesterday.

Several years ago, friends of Cal (second son) and Wil (youngest son) were throwing a farewell party for them.   They were to leave the following night.  Cal was going to Beijing for an indeterminate period to explore some jade business ventures and Wil was enrolled at a university in New York City to begin his freshman as an undergraduate.

Wow! they gonna have a late party before they leave …….

At around 5:00am that morning, my mobile rang with a shrill.  The bluish luminescence showed that the call was from Cal.  Damn the kids, must have ran out of petrol again and calling their Rabbit Dad to fetch them a jelly can of gas, which had happened before and in the middle of a rainy night.

I pressed the green button and placed the mobile to my left ear.

“Yes!” I spoke with my eyes still closed.

“You father of the boys, erh” came the booming voice on my son’s mobile.

‘Oh I am dead’ I thought and sat upright immediately.  This was the type of calls which all parents dread.  Somebody’s calling you on your son’s mobile.

“Better come quick. Your son’s car is involved in a serious accident!” He gave me the address, which was not far from my house.

I sat immobile on my wooden bed for some time, holding my breath and trying to blank out my mind.  Exhaling and inhaling slowly I focused at a point slightly above my eye brows.  Directly and immediately behind was the pineal gland, where the so-called third eye and the sixth chakra resided.

“Guide me to the next step,” I silently pleaded in supplication.

Then I sprung into action.  Grabbing my mobile and putting on a T-shirt, I hurried down the staircase.  It was wiser not to wake up My Excellency, who was sleeping in another room, as it was better to let her ‘finish’ her beauty sleep.

Dawn was breaking as the sky was brightening gradually on the Eastern horizon.  I stomped on the accelerator, put on the fog light with its rhythmic ticks, flashed the high beam light on and off continuously, my palm heel on the honk and jumped 2 traffic lights as I drove to the said destination. Along the way I hurriedly recited, “Our Father who art in Heaven,….. Hail Mother Mary Full of Grace,….Om Ma Ni Pad Mi Ohm…., Ateh Malkuth, ve-Geburah, ve-Gedurah, Thou Art the Kingdom the Power and the Glory….some Taoist rites of passage, some verses of the Buddha Diamond Sutras …” and every religious mantras which I had learnt in the past and which had come to mind.

When I reached the junction, there was already a crowd of people milling around. The car had crashed through a chain-link iron fence and struck a tall lamp post.  An iron strut that held the fence pieced through the car front glass screen, narrowly missing the three of them.  The front screen had been shattered into various patches of spider cobwebs.  The right hand signal kept twinkling on its orange light.

Cal was sitting on the pavement, there was dried blood on his forehead which was cut by a glass splinter.  Wil was lying in a fetus position, his hands clutching his stomach with both hands.  Both were in shock. The girl, who was their classmate, was the most seriously injured.  She was almost to the point of unconscious and groaning in pain.  I held her and called her name and she nodded.  There was no outward sign of serious injuries.  I sniffed all three of them at their mouths.  There was minimal  trace of alcohol.

I took stock calmly and requested help from a man and his wife who were nearby.  The car was a complete wreck.  Cal got up and came to me. I asked him to check their wallets, mobiles and other small items.  With the help of passerby, the three of them got into my car.

This was no time for recrimination.  “You all will live. No worries.” I nodded my head imperceptibly and touched his hand.

“Wil was driving when he suddenly swerved to avoid a morning jogger.  We were not drunk.  We were very tired.” Cal continued to explain. He knew his dad well.  I had never beaten them in all their years, not even a light spanking when they misbehaved.

“Is ok, boy. We go to hospital now for a thorough examination.” I remarked softly.  “Keep talking to me.”

Three weeks later, all the three of them were up and running.  Wil still made it to New York City while Cal left for Beijing later.  The car was a write-off.

Two years ago, Wil was also involved in another accident when he crashed his scramble bike onto a car running a red light.  That time was around 9am in the morning when I received a call on his mobile but it was not his voice. It was a man’s voice telling me that your son was involved in an accident.

Wil was very seriously injured and was warded for a month.

Wil was to leave for New York City to do his Graduate Gemologist on that night. We had to defer his admission for his GG by another six months.

That was November 30, and it was also a date marked into my biological clock. The recurring nightmare will also come around that date without fail.

Surely, Post Traumatic Stress Disorder does not only happen to war veterans.

Now, I have to say this to the boys.  Don’t make that a habit. You do another number of this nature, you will probably find me in the hospital first with a massive heart attack.

From Wikipedia : Post Traumatic Stress Disorder is a severe anxiety disorder that can develop after exposure to any events that results in psychological trauma.  This event may involve the threat of death to oneself or to someone else, or to one’s own or someone else’s physical, sexual, or psychological integrity, overwhelming the individual’s ability to cope.. As an effect of psychological trauma, PTSD is less frequent and more enduring than the more commonly seen acute stress response.  Diagnostic symptoms for PTSD include re-experiencing the original trauma(s) through flashbacks, or nightmares, avoidance of stimuli associated with the trauma and increased arousal – such as difficulty in falling or staying asleep, anger and hypervigilance.