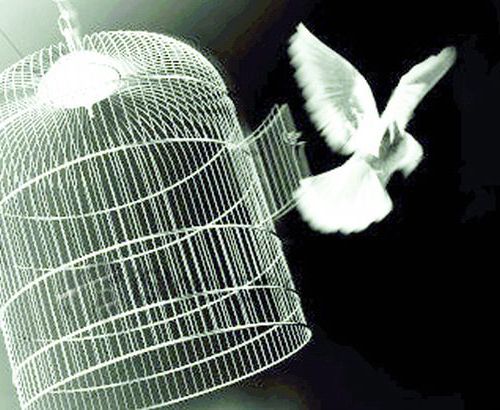 It made me sad to read about the senior monk freeing some sparrows on the local tabloid.  (Refer here Freeing The Encaged Sparrows, Part 1 – FES).

Being a senior monk and the Chief Abbot of a renowned monastery, he should have more insight and understanding on the precepts of Buddhism.  By his gesture, many of his followers may deem that this was indeed a good way of showing kindness and compassion to these caged little sparrows by releasing them and giving them back their lives.  Did he think deeper that he was also one of those responsible for spawning a trade that would have killed many more sparrows when they were first being trapped, than the mere outward display of releasing some lives?  Perhaps this was a misplaced and somewhat self-gratification notion, as perpetuated by many religious men and women, that when a good deed was done such as to release a life from suffering, one would be able to accumulate good Metta credit and would be rewarded later.  Some good men might do ‘bad things’ unintentionally or because of a lack of understanding but for a monk of high standing, this was not an act of benevolence but an act of moral malfeasance and hypocrisy.

I used to do that too.  It happened many years ago.

Vesak Day was three days away.  Veask was a day celebrated by most Buddhists to commemorate the enlightenment of Buddha.  It always fell on the 15th day in the month of May according to the Chinese lunar calendar.  This was also a day when Buddhists would go to temples to pray, give alms to beggars and the homeless, ‘release lives’ of living beings (mostly fish or birds) to give them a new lease in life and other charitable acts.  This was also a time when one would plead in supplication for the compassionate mercy of Buddha to regain one’s health or to pray for the well being of our loved ones.

At one time, my daughter was quite sickly.  She had lost weight and my wife and I had consulted a number of pediatric doctors.  There were varying opinions but we knew that something was wrong.  A soothsayer told us before that if we do a kindly deed in her name on the auspicious Vesak Day this might help her recover faster. And one of the kindly deeds would be to ‘release’ some living beings.

Three days before Vesak I went to buy 15 small sparrows that came together in a rattan cage.  There were two small bowls wired up, one with water and the other with some small seeds. The price was much cheaper and I just had to keep them for three days.  The price would escalate on Vesak Day itself, however, the price would drop drastically after Vesak.  The vendor was doing a rather brisk trade.

On Vesak Day, the weather was fine and sunny.  My daughter loaded the cage onto our small car and we drove to a nearby bridge.  We did not go to any Buddhist temples as there would be thronged with too many people.

We were standing by the railing of the small bridge.  The brownish muddy water beneath the bridge flowed sluggishly as the river meandered lazily through a somewhat flat terrain littered with polluted debris of plastic bags, drift wood, dead small animals and all kinds of rubbish.

I told my daughter to say a prayer for her good health.  As I held onto the cage, the sparrows were quite agitated as they fluttered against the rattan cage and tweeted restlessly as if some animal instinct told them that they were about to be set free.

My daughter was quite excited as she lifted the trap door to release the small sparrows.

A few sparrows flew upwards towards the clear blue sky in free flight.  Three of them tried in vain to flap at their small wings and fell in a parabolic curve to the river below to be swept away by the slow current.  Three sparrows were struggling to fly upwards but their wings were so weak from incarceration that they spiralled downwards but still managed to exert their last of their sapped strength to steer clear of the river stream, flew sideways and rested onto some tree branches beside the river bank.  Two of the sparrows were still inside the cage, standing stationary with their heads bowed low and their wings drooped down.  One of the sparrows was standing like a small crane on one feet.

By now my daughter were in tears.  She just said, “Pa, we are not releasing them.  We are killing them.”

I stood there, crushing emotions welling up in my heart with a profound grief and guilt and I closed my eyes momentarily. I understood something she said.

I took the two birds out of the cage and placed them slowly and gently beside a bush on the bridge. I doubted these two sparrows would ever see another sun rise again.

I stomped hard on the rattan cage, crushed it and took it to a rubbish dump nearby.

“We are not going to do this, ever again.  Let us go home, girl,” I said sotto voce to my daughter.

Eat All Those Damned Lemons!

Arthur - July 11, 2012
4
When Cal (second son) was of legal age to ride a motorbike, he started badgering Tiger Mom to buy him a Kawasaki scrambler bike. ...