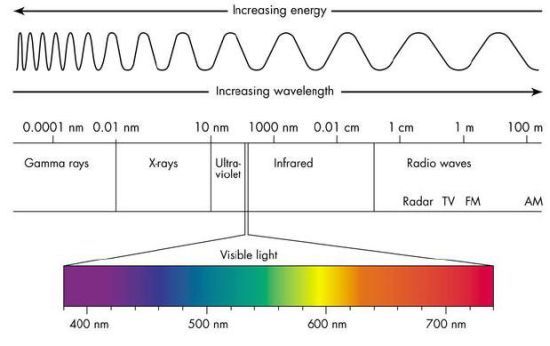 Here is a short introduction in layman’s terms on what is an Electromagnetic Spectrum.  A simple knowledge of this is important in the study of gemstones and gemology.

The electromagnetic spectrum extends from low frequencies used for modern radio to gamma radiation at the short-wavelength end, covering wavelengths from thousands of kilometers down to a fraction of the size of an atom.

In simple terms the following are the range of the Electromagnetic Spectrum:

Radio Waves:  This is the kind of energy that radio stations emit into the air to our radios.  There are also used for fixed and mobile radio communication, broadcasting, radar and other navigational systems, satellite communication, computer networks and other radio applications.

Microwaves: They will cook up your popcorns or reheat your food. Microwaves in space are used by astronomers to learn about the structure of nearby galaxies, and our own Milky Way!

InfraRed: Our skin emits infrared light, which is why we can be seen in the dark by someone using night vision goggles. In space, IR light maps the dust between stars.

Visible: This is the part that our eyes see.  Visible radiation is emitted by everything from fireflies to light bulbs to the stars above.

Ultraviolet: The sun is a source of ultraviolet (UV) radiation.  This UV rays can cause our skin to burn.  Stars in space also emit UV radiation.

X-Rays: Your doctor uses them to look at your bones.  Hot gases in the Universe also emit X-rays.

Gamma-Rays: Radioactive materials (some natural while others are made by man in the nuclear power plants) can emit gamma-rays.  Big particle accelerators that scientists use to help them understand what matter is made of can sometimes generate gamma-rays.

Arthur - July 11, 2010
81
Fundamentals In whatever field you are undertaking, I believed that it is very important to learn the fundamentals.  Even for that matter that you are...