Christie’s International Auction House has rounded another robust Asian sale imperial series in Hong Kong on Wednesday, June 1, 2011 with exceptional demand for Chinese antiques and paintings, a trend a Christie’s director said could make Hong Kong one of its leading markets within a decade.

Christie’s sold HK$3.65 billion ($469 million) worth of Asian and Chinese artwork, jewelry, watches and wine for its spring Hong Kong sales series, a 15 percent increase from the autumn and a record sales tally for the auction house.

Here are some successful auctions: 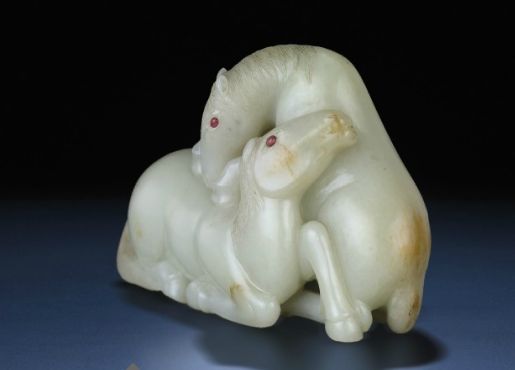 Naturalistically carved with one horse, the forelegs resting on the back of its recumbent mate, modeled as if nuzzling its companion’s fur, the details of the horses’ manes and tails finely combed, their eyes inlaid with tiny ruby beads, the stone with a few areas of russet inclusions. 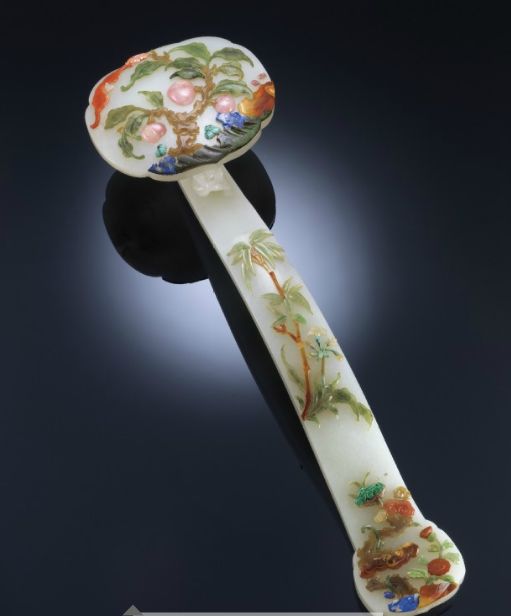 The large sceptre is well carved from semi-translucent stone of creamy-white tone, finely inlaid with pink tourmaline, coral, lapis lazuli, malachite and turquoise, decorating the ruyi terminal with a garden scene of two bats in flight amidst peach branches growing from rockwork, the lower end of the terminal attached to the shaft with a finely detailed seated monkey ‘pillar’, the arched shaft inlaid with leafy bamboo branches and lily stems, above lingzhi and chrysanthemum growing from rockwork at the base of the shaft. 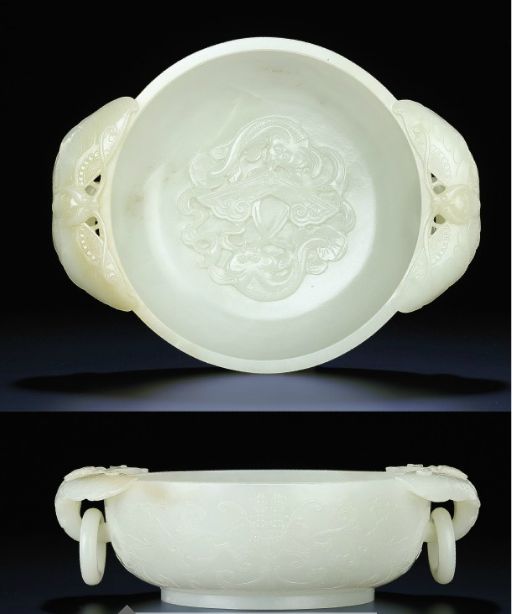 The bowl raised on a short circular foot, the rounded sides carved in low relief to either side with a stylized lotus spray bearing three blooms, the central flower supporting a double Xi, ‘Happiness’, character, the scrolling stems extending around the sides and ending beneath the two large butterfly handles flanking the bowl, carved in the round with wings spread over the inverted rim, each suspending a loose ring, the interior carved in high relief with a central roundel depicting a pair of catfish swimming around a beribboned musical chime.

Each carved through the even apple-green material with a coiled chilong within lingzhi scrolls, the dragon-head hook of the same tone, the underside of each carved with protruding circular tabs of paler tone. 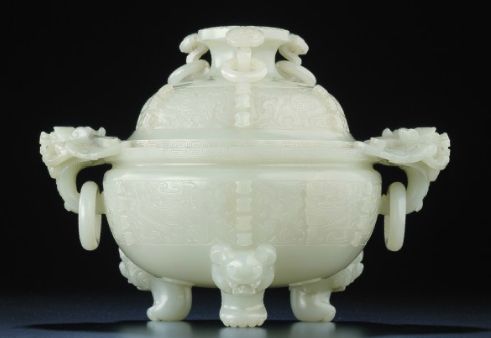 The rounded censer resting on three cabriole legs emerging from mythical beast heads and flanked by a pair of dragon handles, carved in relief around the sides with archaistic taotie mask designs divided by six raised vertical notched flanges below a waisted rim encircled by a keyfret border, the design repeated on the domed cover beneath a large circular out-turned finial suspending loose rings from three ruyi-form handles, the stone of an exceptionally even white tone.

A Set Of Jadeite And Diamond Jewellery

The Love of a Jade Carver