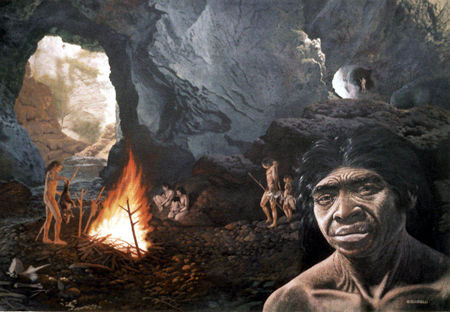 In the beginning, as wild beasts roamed the raw earth in search of prey, the people wandered the land of the earth in search of fruits, roots, plants and small wild animals for food.  They had only broken branches snapped from trees to be made as clubs and spears to protect themselves against attacks from these wild beasts. As these clubs and spears were not strong enough to ward off these huge wild beasts, thus, these people were often at the mercy of them.

The people had to move in groups to forage for food as the larger the number of people the greater would be the security.  Even then, the group often lost a member or sometimes more than one member would lose his life to the vicious attack of these wild beasts.  When the life of a member was lost there would be tremendous grief among the people as an adult life was precious.  Infants and children often died young during the cold months of winter.

One day a group of 12 people were out hunting.  They did not have much luck for that day and they only managed to trap a few small animals.  Though the day was still young, the sky was already overcast with dark angry clouds and it looked like rain would burst forth upon the mighty earth in torrents.  Occasionally when there were far away flashes of lighning followed by the rumbling sound of distant thunder, the ground would shook.  But this group of people was fearless as they knew that they had the heavy responsibility of bringing food back to their cave of abode.

Suddenly a huge black beast, more than twice the height of the people’s leader, with heavy broad shoulders and a mane of dirt-clad blackish hair and with claws that were about the size of a man’s forefinger, appeared from nowhere and bellowed aloud with an errie howl that echoed through the land like a trapped and wounded animal.  The beast romped towards the leader of the group clumsily and pawed at the leader.  Miraculously, the leader warded off the maul with his club and fell heavily onto the raw earth.  The remaining group of people descended onto the huge beast in unison and tried to pierce it with their somewhat pathetic wooden spears.  The huge beast swung around and with one swoop fell down another 3 of the people.  Clearly, these people were no match for the brute force of the beast.

At this fortuitous moment, there was a blinding light from heavenward followed by a thunderous clap just behind the beast.  A tall tree charred by the lighting fell slowly with a loud breaking creak and smaller trees caught fire.  The beast was suddenly frightened as never before and ran backwards on all fours and disappeared into the bushes. 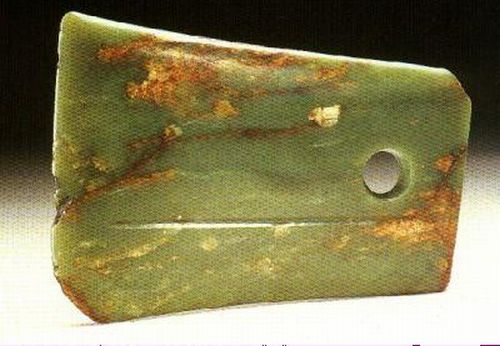 Just then the people heard a loud crash that told them something had fell from the sky.  They went in search for it and found that it was a quite a big stone.  They knew then that the Thunder God had again saved them by giving them a hard stone to make into an axe as a weapon to hunt and as a weapon to protect themselves, the first time being when the Thunder God bestowed on them the lightning fire so that they could cook their food.

The people then called this stone, Jade – the Stone of Heaven.