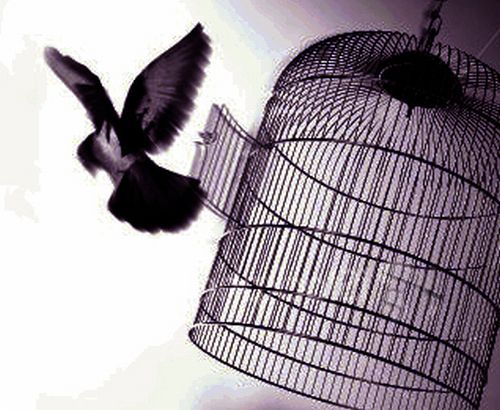 Last month I read an article in a local tabloid of a highly venerated and respected Monk officiating the opening of a Buddhist temple.  There was a colored picture of him with some honored guests together with some of his docile followers standing behind.  There was also a small write-up to describe the event of the day.

The photo captured the essence of the story.  A bird cage rest on the palm of the left hand of the Monk and his right hand was holding onto the hook at the crest of the cage.  He tilted the cage at an angle just above his shoulders and held it skywards.   A few small birds, probably sparrows, were freeze-framed in mid-flight, flying off to its freedom whilst images of a number of sparrows were blurred, thrashing about to find the exit.

The Monk was dressed in maroon red habit with a yellow saffron robe overlay, as typical of a Tibetan Llama priest.  His well build stature indicated a healthy and well-fed body and his exposed arms were muscular, yet the fine fair skin had a silky whitish creamy sheen. Perhaps to his followers, there was an aura of ‘holiness’ and dignity as becoming of being the Chief Abbot of a famous monastery to grace the occasion of opening another branch to propagate the teachings of Buddha.

Standing beside the Monk, a local MP politician grinned his toothy smile.  As politicians go, they never failed to ride on the popularity of local community leaders, whether they were monks, priests or some business association chieftains.  The politicians were always there for such events so that people could identify them as being associated with charity, spirituality and to show the general masses these politicians had taken a keen interest in the well being of the community.  More than likely his agenda was to draw their votes, especially when the general election was rumored to be looming near.

To lend credence to such an auspicious occasion, the chief editor of the tabloid was also captured full faced on the picture.  He looked more like an idiot in his out-of-place coat and small polka tie.

And to the clap of hands by the honored guests and the Buddhist laxity, the Monk slide the trap door of the cage open to let the sparrows flied free.  To this group of people, this symbolic gesture by the Chief Abbot was to announce his benevolence, magnanimity and compassion to set free the lives of some living beings, in order that they could be on their own and go back to their natural habitat of forest and hills where they should belong.  As these small sparrows were bought by the followers of the temple, those who sought the release of these incarcerated living beings might thought that they would gain merit for a good deed being done, for the loving-kindness being shown and for the mercy being dispensed.

As the last of the sparrow flew off from the cage, the Chief Abbot was invited back to the inner prayer hall where he would deliver a Dhama talk.

Type C Jadeite Jade – Much Ado About Nothing