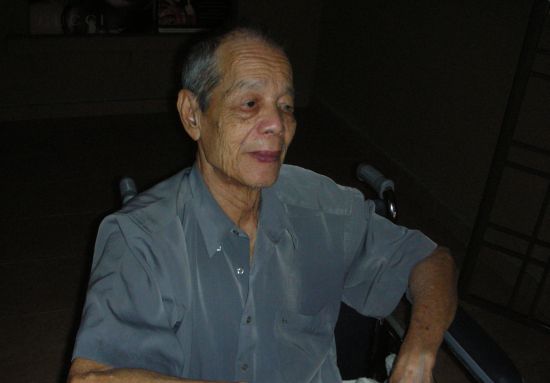 My father is now 88 years of age.  On a fine day in August 2008, he complained that his left leg was numbed and he could not move the leg at all.  My mother called up me immediately and I suspected that my father may be having a stroke.  I asked my mother to sterilize a needle and pricked all his 10 fingers until each finger drew a small dew of blood.  That might have saved him from a major stroke.

He was driven to a local hospital and the MRI scan showed that there was a blockage on his left thigh. Since that day, he was left immobile on a wheel-chair. He could do some walking with the aid of a walker and someone to hold him in case he fell.

Prior to that fateful day in August, he was quite active.  He loved to take walks and did some light exercises.  His left eye was blinded by an accident some years back.  His right eye was impaired by glaucoma and still he would take the magnifying glass to read some Chinese newspaper headlines.  For the last year or so, he could only see bright flashes.  He also has been taking hypertension pills for a number of years.  Otherwise, he is still healthy with a somewhat good appetite.

I have been taking him for regular check-up for a number of years at the Kuala Lumpur Hospital, which is a government hospital, where medication and specialist consultancy are free for senior citizens.  Private care would have cost an astronomical sum.  Now, one would hear a lot of public complains and grouses about government hospitals and clinics.  However, in all the years that I took my father to the hospital, I have not heard of any nurses or doctors shouting at any of the patients.  In fact, the attending doctors and nurses are all courteous and often they are extremely patient with the out-patients.  The attending doctor will always touch their hand, handle their stereoscope gently and speak softly, often repeating their questions several times as a number of patients are hard of hearing or perhaps they have very short attention span.  My salutations to all these doctors and nurses for their care of their patients at the hospital.

I also took my father for acupuncture on alternate days.  But after one and half years there was really no improvement.  So we stick back to our routine of walking him.

It was not difficult to help him adjust.  The suddenness of his immobility did not left him embittered with remorse and self-pity.   He is not a bad tempered person and he seldom complains.  In fact he is ever grateful that his daughter and sons take well care of him. He never demand to be taken out for some fresh air, never demand to eat his favorite food nor does he demand that we must always be in attendance to him.  And his days are spent on listening to some old classic Cantonese operas and some Buddhist scriptures of life, philosophy and religious teachings.

A half paralyzed person is a dead weight.  His ambulatory movement being limited, he has no control over his left leg.  At first it was straining to get him on and off the wheel-chair, the bed or to get him into the car. One has to have patience when dealing with an incapacitated person.  What seems like an easy movement, it may be difficult for him to move even a foot in front.  Fortunately, his hand grip is still strong and he learns to balance without falling.

After a while, I learn to adjust to his motion without having a backache or putting unnecessary strain on him.  He takes one step forward I take half a step forward. He moves half step towards the left I move a full step towards the left.  His right foot must always gain purchase of the floor before his left dangling foot moves forward and the walker helps him to balance.  It is also easy to anticipate his next step as it becomes an automated response.   Every of my steps must be in synchronous with his ability to move and must come from his own willingness and determination to walk.

Hence, it only takes one to tango …..

Type D Jadeite – What Is This?

Arthur - June 18, 2011
4
// My aged parents have been living with my sister these last few years.  When my father had a stroke, his ambulatory movement is...