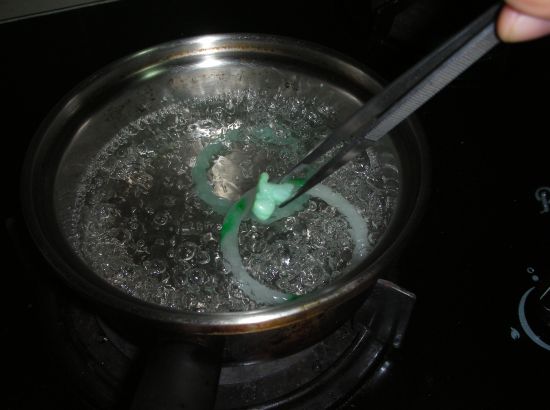 A reader posed the following question to me:

So I tried out a little experiment.  I used 2 Type B Jadeite Jade bangle (they are polymer impregnated jadeite jade of which I have scanned through using the Perkin Elmer FTIR equipment) and the doggie jadeite jade pendant which was dye coated.  Read this post ‘Dye Coating of Jadeite Jade.” I poured a whole bottle of vinegar into a small pan basin, put the 3 pieces of jade into it and heated it up until it came to a boil.  Then the fire was turned down to half to keep the vinegar boiling and shimmering. The vapor from the vinegar was quite pungent.  The 3 pieces of jade were left in the pan basin until the vinegar had evaporated after about 25 minutes.

End Result: The 2 polymer impregnated jadeite jade bangle were intact.  All the dye coating on the doggie pendant came off.

Conclusion: Vinegar is a mild diluted acetic acid and will not cause any color deterioration to the jade pieces.  Vinegar composition is about 3% acetic acid and 97% water.  But when it comes to a boil for some time, the dye coating of the doggie pendant will come off.

Water boils at around 100oC at 1 atmospheric pressure.  Jadeite Jade’s melting point is around 1,200oC.  You have to note the difference between boiling point and melting point.  The alkenes polymer used for the impregnation of the 2 bangles have a high Glass Transition Temperature (TgoC when the polymer goes from a hard, glass like state to a rubber like state) hence, the boiling vinegar has practically no effect on the two bangles.

The method used above to test whether a jadeite jade has been impregnated with polymer or dye coated is very primitive.  This is a destructive test as you will never know the end result until it is too late.

For detection of dye coating, it is best to use a high magnifying microscope or as most people do not have one, then get a 20x or 30x loupe to examine the color of the jade. A 20x or 30x loupe has a very limited depth of field but it will enable you to zoom in on a narrow particular area to determine whether there are any traces of dye in a jade piece.