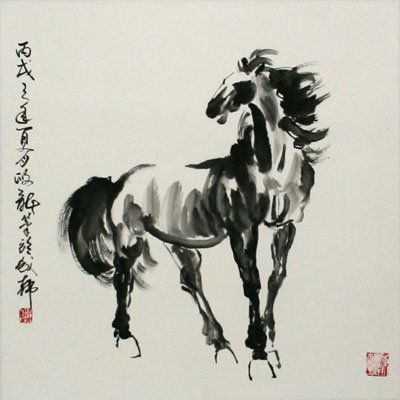 In ancient China, a certain king was willing to spend a thousand ounces of gold to buy a thousand-li* steed, but was unable to locate one for three years. “I’d like to go and find one for you!” one of his eunuchs said to him.  The king let him go to find the fine steed.

After searching for three months, the eunuch finally learned of the existence of one such fine horse, but by the time he found the place, the horse had already died.  The eunuch made some quick calculations and finally bought the dead thousand-li horse for five hundred ounces of gold.  He returned to the capital bearing the head of the dead horse.

When the king heard that his eunuch had spent five hundred ounces of his gold to buy the head of a dead horse, he shouted at him: “I wanted to buy a live horse! Why would I want a dead horse’s head for?  You’ve wasted my gold for nothing!”

Sure enough, the king was able to purchase three thousand-li steeds within the year.

From: Zhan Guo Ge (戰國策, literally means “Strategies of the Warring States) is a renowned ancient Chinese historical work and was compiled between the 3rd to 1st centuries BCE in Ancient China.

*li is an ancient Chinese measure of distance and is approximately 1/3 of a mile.

Lunar Year of the Rabbit

The Intellect of the Hen

Arthur - January 12, 2011
2
Along the triangle gables of the farm, the swallows sat tightly and packed closely to each other in a row.  They were twittering uneasily...