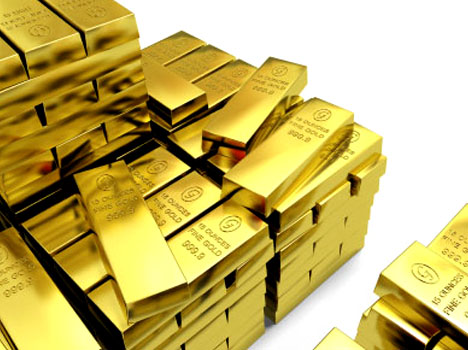 Gold’s continuous ten-year rise hasn’t sheltered it from controversy. Despite producing consistent returns in virtually all currencies year after year, some market pundits still question its validity as an asset class.

It’s true that gold doesn’t pay any interest, and it’s also true that much of the gold produced throughout history still exists in some form today. But these characteristics shouldn’t inhibit it from performing as a monetary asset. Cash, after all, doesn’t pay real interest either, and there is more fiat money in existence today than ever before. So why does gold still receive such harsh criticism?

We believe much of it stems from a widely held misconception that gold is forming a financial bubble. It’s a fairly straightforward view – that gold buyers are merely foolhardy speculators buying on a whim with no rationale other than to sell to the ‘greater fool’ at higher prices in the future. It’s a view that assumes that gold has no intrinsic value and is simply a speculative asset that has captured investors’ imaginations.

We don’t take these views on gold lightly. We’ve seen bubbles before and fully know how they end. We have no interest whatsoever in participating in some sort of speculative frenzy – that’s a recipe for disaster in the investment business. Thankfully, however, our gold investments present no such risk. As our analysis has revealed, gold is actually a surprisingly under-owned asset class – and one that has generated far more attention in the media than it probably deserves. While its exemplary performance since 2000 is certainly worthy of discussion, gold simply hasn’t commanded enough investment to warrant the bubble fears it seems to have aroused among market pundits and business commentators.

The truth about gold is that most people simply don’t own it…yet. To be clear, a speculative bubble forms when prices for an asset class rise above a level justified by its fundamentals. For this to happen, increasing amounts of capital must flow into the asset class, bidding it up to irrational levels. Gold may be trading at all-time nominal highs, but a look at investment flows proves that it isn’t anywhere close to being overbought.

In their Gold Yearbook 2010, CPM Group noted that in 1968, gold held by individuals for investment purposes represented approximately 5% of global financial assets. By 1980 that amount had fallen to roughly 3%. By 1990 it had dropped significantly to 0.6%, and by the year 2000 represented a mere 0.2% of global assets. By the end of 2009, nine years into the gold bull market that began in 2000, they estimate that gold had increased to represent a mere 0.6% of global financial assets – hardly much of an increase.

The 0.7% ownership data point also has interesting implications for global gold ownership going forward. Consider that to return to a meaningful level of gold investment, say to the 5% level of 1968, it would require over $9 trillion of gold investment today, or about 6.5 billion ounces of gold at the current gold price. This would represent well over 1.3 times the amount of gold ever produced throughout history and four times the amount of known gold reserves. 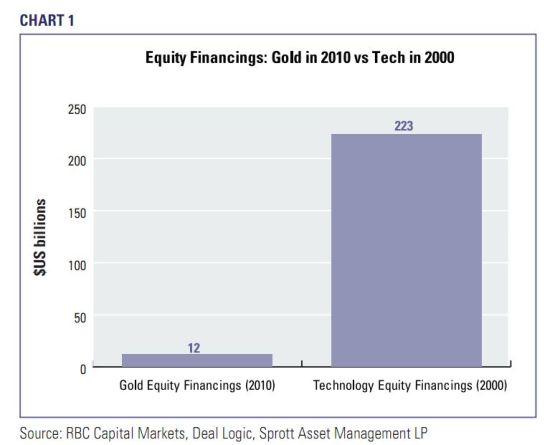 4,5So not only is the public relatively underinvested in gold, but at current prices it isn’t even possible to increase our gold holdings back to a meaningful level. Gold’s apparent underinvestment also applies to gold equity financings since 2000. According to our sources, gold companies raised approximately $78 billion of equity capital in new financings over the past 11 years.6To put this amount in perspective, this is equivalent to the total amount of equity raised by technology companies in the first three months of 2000.7 To further illustrate the lack of activity in the gold equity capital markets, we compare last year’s gold company financings with the technology company financings in the year 2000 (Chart 1). Once again, looking at the relative amount of capital market activity in the gold equity markets, we find no indication of a bubble whatsoever. Furthermore, we compiled information on mutual fund flows to get a sense for the average retail investor’s appetite for gold equity investments (Chart 2). We found very familiar results in this area as well: compared to the $2.5 trillion dollars that was invested in US mutual funds since 2000, precious metal equity funds have seen a mere $12 billion in inflows. If there is a bubble in gold investments, the average retail investor hasn’t participated in it.

To truly gauge the level of exuberance (or lack thereof) in today’s gold market, it’s beneficial to review equity valuations, since they provide an excellent lens into investor sentiment for an asset class. Certainly if a bubble was forming in gold, it would likely rear its head in the stock market, where speculative manias have been fleecing ‘greater fools’ for centuries.

The best gold index to review for valuation is the Amex Gold Bugs Index (HUI), which has returned a stunning 674% since 2000. It is certainly an index that could be mistaken for a bubble based on its incredible performance… until one considers its relative valuation. 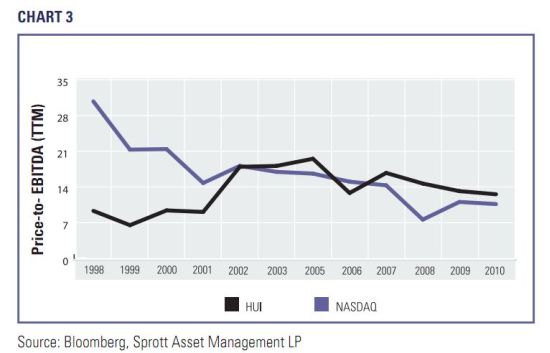 In Chart 3 we present a time series chart comparing the price-to-EBITDA of the HUI vs. that of the Nasdaq Composite since 1998. Price-to-EBITDA is a valuation metric that compares a company’s stock price to its profits before accounting for taxes, interest payments, and non-cash charges like depreciation and amortization. It is similar to the ubiquitous price-to-earnings (P/E) multiple but allows for a comparison across periods where net earnings are negative and P/E ratio’s incalculable.

Looking at the price-to-EBITDA multiple for the HUI Index we see absolutely no evidence of a frothy market for gold stocks. At the current level of 13 times EBITDA, the HUI is actually trading below its 15-year average of 14 times. Moreover, valuations for gold stocks are currently one-third of the levels reached by the Nasdaq in late 1999.

There simply isn’t any evidence of excessive valuations in gold stocks, which is most certainly where we would expect the excesses to be most apparent. Based on our findings,  this notion of a gold bubble is patently false. The current investment interest in gold relative to other financial assets remains surprisingly low – about where it was two decades ago. Moreover, the modest valuations of gold equities highlight the absence of unbridled investor enthusiasm for gold investments. The fact is, despite all this talk about the gold bubble, the capital flows into gold vis-à-vis other financial assets have simply not been large enough to indicate any speculative mania. Investors can rest assured that they are not participating in any speculative bubble by owning gold. They are merely protecting their wealth.

Ask Me A Question?

The Inheritance of 17 Camels

Is This Jadeite Jade?

Is Gold Ring Karatage As Hallmarked?