Cameos, carvings or simulated carvings featured raised images of faces or figures, are once again back in vogue. One of the first glimmers of this trend showed up in the November 2010 issue of More magazine, which showcased modern versions of cameos in the style of Queen Victoria’s era. 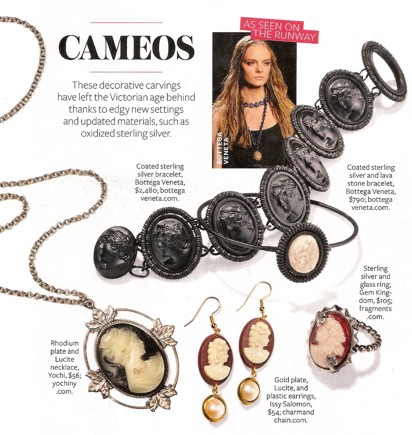 The April 2011 issue of InStyle similarly highlights modern versions of cameos, stating: “These decorative carvings have left the Victorian age behind thanks to edgy new settings and updated materials, such as oxidized sterling silver.” The jewelry pictured consists of two sterling silver bracelets from Bottega Veneta, the bangle with a lava stone cameo; a sterling silver and glass ring from Gem Kingdom; gold plate, Lucite and plastic earrings from Issy Salomon, and a rhodium plate and Lucite necklace from Yochi. 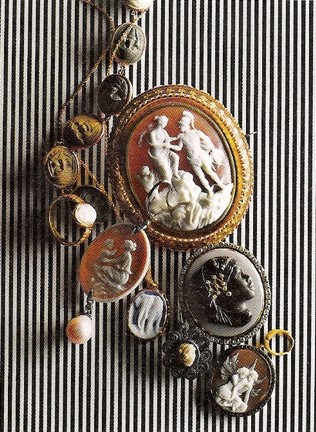 Antique cameos carved from materials such as onyx, agate, coral, lava or shell and typically set in karat gold are also very much back in vogue. Sarah Taylor writes in the February 2011 issue of W Magazine: “Long considered aristocratic, sentimental, and romantic, cameos have never been seen as cool. Until now.”  The jewelry pictured (clockwise from top) consists of a mix of antique and new versions:  an antique necklace from Fred Leighton; antique brooch from James Robinson; antique brooch from Fred Leighton; earring from Gennaro Borriello; earring from Bottega Veneta; pendant and earring from Amedeo by M+M Scognamiglio, and antique ring from Kentshire. 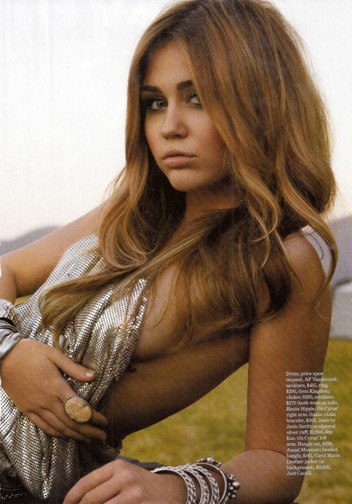 Singer Miley Cyrus, now a lovely young woman of 18, is pictured in the March 2011 issue of Marie Claire wearing a silvery mesh dress from AF Vandevorst with a cameo ring from Gem Kingdom. She also wears a snake-chain bracelet from Janis by Janis Savitt, a sculptural cuff from Jen Kao, bangles from Assad Mounser and a beaded bangle from Carol Marie. 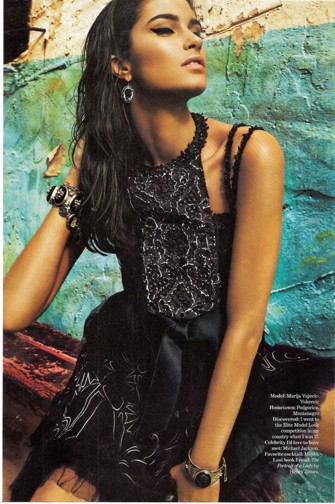 Also in the March 2011 issue of Marie Claire is this photo of a model wearing a Chanel dress accompanied by cameo earrings and bracelets from Gem Kingdom along with an agate bracelet from Stephen Dweck and a cameo-adorned cuff from House of Lavande. 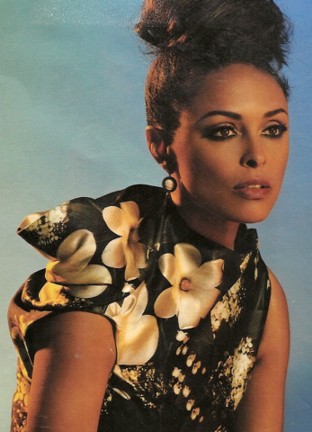 The March 2011 issue of More accessorizes a trendy floral print top and skirt from Vera Wang with silver cameo earrings from Bottega Veneta.  Wearing either precious antique cameos or their edgy modern versions might put one at the head of the class in fashion this season.

The Northern Light In A Gemstone

It is not a 19th century pendant!

Arthur - January 15, 2011
0
One of the hottest trends of the season is the use of bright color. It takes on a special intensity when it appears over...