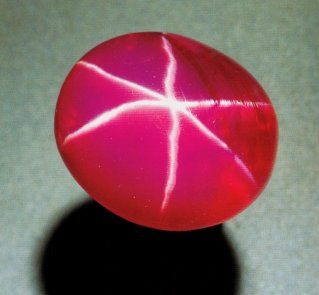 Phenomena gems are gems that display unusual optical effects.  These optical effects can be brought about by a concentrated beam of light and different types of lighting conditions when light interact with the inclusions and the particular inner structure of the gems.  Phenomena gems are often cut as cabochons and tablets to bring out the full impact of the phenomena.

When you are viewing any gemstones use a strong concentrated light source, such as a fiber-optic light or a powerful penlight and move your light above the stone to look for the phenomena.  Learn some fundamentals and you will have a greater appreciation of what nature has endowed mankind with its various gemstones from the earth. (Read here for Fundamentals)

There are 9 types of Phenomena that occur in various gemstones as follows.  The gemological term for the phenomena is described in the first word/s:

Asterism – A Six-Star that forms at the apex of the dome of a cabochon in rubies or sapphires.  As your light source moves the star will follow suit.  Gemstones that have this phenomena includes Corundum (Read here) and Quartz.

Chatoyancy – The Cat’s Eye effect on the dome of a cabochon with a band of bright light across the gemstone, usually it is vertical on the broadest side, like an eye.  As your light source moves across the dome the ‘eye’ will follow.  Cat’s eye gemstones include Chrysoberyl and tiger-eye Quartz.

Play-of-Color – The flashes of rainbow color in an Opal is called Play-of-Color.  For black body Opal this Play-of-Color produces a beautiful spectral color across the surface of the stone as it contrast with the black base.

Iridescence – This is the presence of spectral color on the inside or outside of a gemstone.  Gems that show iridescence include ammonite, fire agate and iris agate.

Orient – This is a form of iridescence found on the nacre of pearls. The orient is usually cream, silver or black.

Adularescence – This is a billowy light across a Moonstone Feldspar which is normally light blue and shimmering.

Labradorescence – This is a broad color flash of rainbow color across Labradorite.

Aventurescence – This is the color spangling of Sunstone or the glittering light from green Aventurine Quartz.

The cause of each phenomena will be explained in forth coming individual postings.

Photo courtesy from the following websites:

Will Synthetic Gemstones Depreciate The Value of Natural Gemstones

A Star Is Born

Arthur - May 29, 2010
16
Learning how to use a jeweler loupe properly is one of the most important skill that you have to acquire, whether you want to...